Given last week’s announcements of:

it’s imperative that we talk more about what Niagara Regional government can do to alleviate poverty.

The alleviation of poverty is a concern for everyone to whom I’ve spoken. This has been true not only since I filed my nomination papers in May, but since I was on St. Catharines City Council (where I asked for a report about what a living wage would be in St. Catharines and how we could advocate for it, then was invited to join the Niagara Poverty Reduction Network‘s Wages and Work workgroup) and then went on to work at YWCA Niagara Region as their fundraiser.

Throughout the business community, the community of non-profit agencies, and at people’s doors, people are thinking about what we can do to alleviate poverty. In 2013, the cost of the consequences of poverty in Niagara is $1.38 billion per year. With the use of homeless shelters and food banks increasing every year, we know that this cost has only increased.

Poverty is an obviously complex problem that requires the expertise and support of numerous people, agencies, and initiatives.

Through this series of blog posts, I will share some ideas for what Niagara Regional government can do to alleviate poverty. 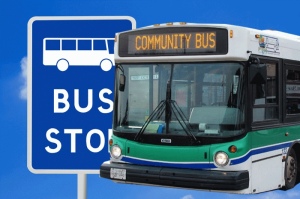 Through various roles, I’ve advocated for a more robust transit system throughout Niagara since 2000. Presently, there are eight transit systems/programs operating in the Niagara region (Fort Erie, Grimsby (needs investigation stage), Lincoln, Niagara Falls, Niagara-on-the-Lake, Niagara Region, Pelham, St. Catharines – including Thorold, and Welland – including Port Colborne), which means every community, except Wainfleet and West Lincoln has some access to transit.

However, the schedules, routes, and lack of necessary connections make it difficult to get around a geographic area as large as the Niagara region. Bus rides are long, made especially problematic if you need to take a bus to get children to childcare then get yourself to work. Because of the inefficiency of the system(s), ridership is low, which means fares aren’t as affordable as they could be. So, people still find that – if they want to get to jobs, childcare providers, school, medical appointments, etc., they still need a vehicle of their own.

Streamlining the transit services, coordinating the stock of transit vehicles that already exist in Niagara, purchasing more transit vehicles (they don’t all have to be large buses, we can invest in smaller buses and even 10- or 20-person vehicles), adding more routes, and expanding schedules will come at a cost, of course; however, it is well beyond time that all of Niagara was accessible to all citizens of the Niagara region.

Additionally, we know that:

“There is significant evidence to show that the improved connectivity supplied by new transit services generates increased land & development value. This is well recognized by the development industry.”

But this can’t only be about GO trains and transit close to where the trains travel into and out of. It has to be a comprehensive transit system across Niagara that provides everyone with access.

Reliable, efficient, and (ultimately) affordable transit will help in the alleviation of poverty.